The Beauty and the Magic in Failure

I felt sheer panic. I looked at the audience as they sat there smiling in anticipation. I opened my mouth to sing and in that instant I knew I was in big trouble...

Last year my husband and I decided to do a special Christmas performance. We rented out the beautiful Kay Meek Studio theatre. We booked the perfect weekend. It was a gamble, but as a couple we have become used to taking theatrical gambles. There is magic in the gamble. Or at least there had been so far.

I have a guide post that helps me make decisions. It's rather simple. I ask myself Would I regret it if I didn't do ________ and I fill in the blank. I've come to realize that that simple question helps me to get past the fear of the unknown a lot. Will I regret if I die and have never jumped out of a plane? The answer to that is no. Would I regret it if I never bungee jumped, or climbed Kilimanjaro? Again, the answer would be no. But would I regret not ever recording an album? That would be a big yes. Or producing Divalicous! ? Another big yes. So, a year ago I asked myself the same question, would I regret not putting on this Christmas evening we had planned ... and the answer was yes. A big yes. So off we went making the plans to present an "Old Fashioned Christmas".

We had a beautiful evening planned. The first half was my husband's show Grandpa 'n Me, which we had written a special Christmas scene for. Following the one-act would be an intermission and then I would come out, along with Bill Sample on the grand piano and sing some familiar and not so familiar Christmas tunes. There were stories planned, and sing-a-longs. Beautiful songs. It was going to be a wonderful evening. An evening for family. Togetherness. Fun. Warm and cozy. We should have no trouble selling tickets. I mean, it was Christmas time right?

Ten days before the show opened we had sold at the most 10 tickets over the entire three nights of performances. I kept waiting for the rush to come in, but it never did. My calmness left. I began worrying. A lot. I could barely sleep. What were we going to do? At the rate we were going we would owe the theatre money after the run. We were in big trouble. I became desperate. An awful place to be. I didn't handle it well. Panic is not an outfit I look very good in. We pondered cancelling the show, but were too close to opening to do it contractually. More wide-eyed, sleepless night panic ensued. I sought out a loan from my sister, just in case things went sideways. God please don't let things go sideways. I followed my gut? What was happening?

Thankfully, a day or two before the show, tickets began to sell. Not enough to break even but enough to give us some hope that we may, hallelujah and Merry Christmas to all, not owe the theatre that much at the end of the run. Vancouver is such a last-minute town. My word people! Stop doing that! Anyway, I felt like perhaps I could relax and simply enjoy performing. And then ... I felt it. That familiar tickle in the back of my throat. An itchy ear. A slight chill. A cold was coming (more than likely from all that panic) and it was one day before we opened. No! This couldn't be happening to me! I willed it away. I drank my trusty cold killer tea (fresh ginger, honey and lemon) and thought to myself, It's nothing I'll be fine. It wasn't. I woke up opening day sounding like Barry White with a cold but not nearly as sexy. Seriously?

When my husband and I produce a show, my husband is the guy who helps put the set together and make sure the props are all in theatre, he's great at putting posters up and of course writing a great play - but I'm the gal who does the business end of things and also does the tech side - which is laughable, since I am about as un-technical as you can get, except perhaps for my husband - he is even worse. So, I am the one who is in the lighting booth, or in this case several feet away from the booth so as not to get the lighting person ill (you'd have thought I had the plague. She stopped short of hanging bulbs of garlic on the wall). Opening day I had to talk for 6 hours straight, while we built the lighting and sound cues for both shows. The entire time sounding like dear sexy Barry White. I felt slightly worse as each hour passed.

Finally done (Kay Meek staff are incredibly competent) it was time to get ready to do my role in Grandpa 'n Me. I knew as soon as I spoke that it was going to be an interesting evening. I sounded like a man in drag as I narrated this beautiful show. I had not had a chance to even think about how I would handle the second part of the show. As the show progressed the more worried I became. I had no plan B. Panic was rearing its ugly head again.

Now, I have sung with a cold before. I have sung with a bad cold and have done fine. But this, this was something different. I was really ill. I was burning up with a fever. I should have been in bed with a whiskey and a good book.  But instead me and my 1-900 voice were telling the story of Grandpa 'n Me. During intermission I saw Bill. I bellowed a bass Hi. He just stared at me. "You've got to be kidding." "Nope. Do you have a solo you can play? I'm in big trouble."

Oh, I was in big trouble. As it turned out I had a vocal range of about three notes, all of which were low. Really low. I had all these songs prepared that were beautiful yet challenging and I was going to massacre each and every one of them one. In front of a paying audience no less. Thankfully, I had prepared some poems to read which sounded lovely enough when spoken by Barry, but other than that it all felt like a disaster. I was apologetic on stage. A big No.No. Desperate to fix the situation. Yet there was absolutely nothing I could do to fix it. I had to fix it! I had to! This beautiful audience had paid money to come and see me perform and I was not performing at all. I felt horrible. The audience was very kind to me. I, however wasn't. I was ruthless to myself. I went home and cried. I was a failure.

The next day I was on the phone trying to find a fellow musicians to sing in my place. No such luck. Everyone was either already ill or booked. Why can't I fix this??? So, I cut a couple of songs from the show, asked the lovely Saige Woolley from Grandpa 'n Me to join me on stage for some duets (she would sing the high stuff), added a piano solo for Bill. We'll have a sing-a-long! It will be ok....perhaps. That evening was a little better. Much better actually. I wasn't so desperate looking or apologetic. The audience seemed to have a good time. When I got home though, again I was ruthless to myself. No tears, but ruthless.

Then it happened. I let go. I was not going to be able fix this. It was what it was so I may as well let nature take its course. I'm a person who likes to control things. I want them done right. I like every minute detail to be covered. But in this particular situation I had no control. None at all. I could not fix it. It just was. So I let go and I... my friends ... never let go.

There truly is magic in letting go. It was the Saturday performance. The lovely Saige again joined me for a duet. Bill did his piano solo. There was the sing-a-long.

My voice now sounded like a strange mix Barry White and Rod Stewart.

I went with it. I relaxed.

My daughter and Me.

I sang Let it Snow with my daughter. She had come into town to see the show. She was nervous. Her first time singing with her mama and before a paying audience. The audience shared the precious moment with me. A moment I'll never forget. A mama and her girl. She was so nervous, I held her hand. We looked at each other and sang. She calmed a little. The audience ate it up. It was wonderful. 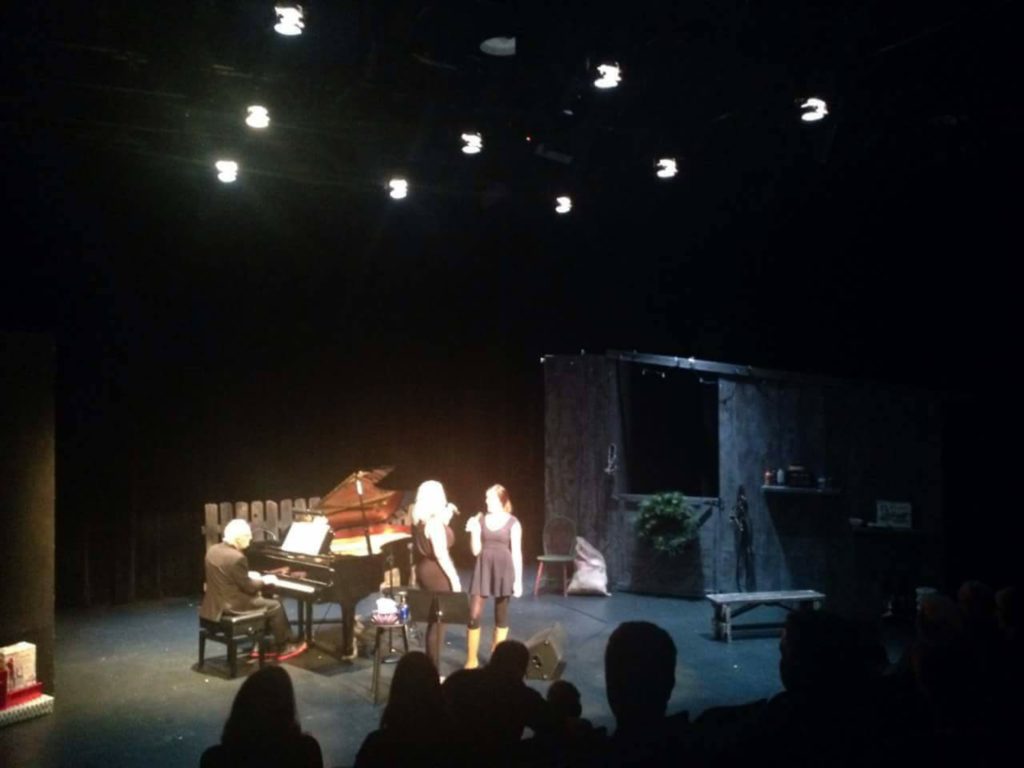 The show was homey and beautiful. Everything I had wanted it to be. We all laughed together. Listened to the stories. I asked for volunteers and a bunch came on stage. We were all in it together working as a team. It was unique. Special. Beautiful. The second to last tune in the show was a blues number "Merry Christmas Baby" which I would have rocked had I been well. When I started to sing it I realized my range had increased by say 1 or 2 notes. Eureka! I went for it, singing it as best as I could. I gave it everything I had. Which left absolutely nothing for the final song., Have Yourself a Merry Little Christmas. I was done. I had done my very best for the past three nights. I had given my all and now I was spent - one song too early. I was missing every other note. This time I didn't apologize. I didn't panic. No. I had let go remember? I simply looked at the audience and said. "I need your help."  I got it. This beautiful audience sang. They sang strong. They sang true. We were one. "And have yourself a merry little Christmas now." I get chills thinking about it. It was beautiful.It was magic. Pure magic. It was Christmas.

I leaned a huge lesson that weekend. Trust me, I never want to experience something like that again. It was incredibly stressful. I did; however, realize the peace that comes from letting go and just being. We took the gamble and some may view it all as a failure. Although things didn't turn out the way we had planned, we still entertained. The audience got what was on the bill - an old-fashioned Christmas. There can be magic in a perceived failure if only we look for it and simply let go.

Oh and by the way .... we broke even. I think we had a little left over to buy me some more ginger for my tea.