Pushing Past the Fear

Fear held me in its grasp, squeezing the life from me and then …

Fear is an amazing thing. It can be fun in that “I’m on the rickety old wooden Roller Coaster at the PNE” … or “munching popcorn and watching Silence of the Lambs” sort of way. It can stop you from doing something stupid like “I wonder if I jump off this roof with my Wonder Woman cape on will I float down?”. Or, it can stop you from living. Fear can be debilitating. It can stop you from moving forward. Comfort is nice. Comfort is … well … comfortable. I like that place. I love feeling comfortable. Yoga pants and sweat shirt comfortable. Comfortable kept me in my first marriage for a few years too long. Comfortable stopped me from starting my own company. Comfortable told me singing professionally was no longer an option. Comfort … is another way of saying fear. Fear of the unknown. Fear of what is on the other side. Fear of failing. Oh the fear of failing is huge.

I’m a grown up. I’m a woman of a certain age. I’m supposed to not care what people think. I’m supposed to be a free spirit and just be. I’m not though. I try. I’m getting better at it. But fear can still hold me in its grasp. It can squeeze the life from me… and as I gasp for air I remember the words of my sister Joyce. 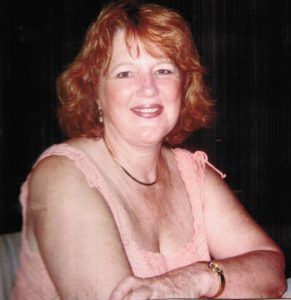 My sister Joyce was big, bold, bossy and brassy!

My sister Joyce was a force to be reckoned with. She was not a small woman. In fact she was rather large in comparison to me. But she had so much confidence in herself. As far as she was concerned she was Marilyn Munro with red hair and Raquel Welch rolled into one. She thought she was the sexiest thing going. The word fear was not in her vocabulary. She was tenacious. She was persistent. In one word my sister Joyce was amazing…. and bossy.

I lost my sister to ovarian cancer 9 years ago this February. I’ve actually lost two sisters because of ovarian cancer. My beautiful sister Sheila passed away just this past December. I no longer own ovaries because of it. I said “Doc, get these things out of me now.” It proved to be a complicated procedure, but they’re gone and I breathe a little easier at night knowing I’ve done all I can do to stop it from happening to me.

Before my sister Joyce passed away I visited her at her home in Tacoma, WA. She knew her time was short and she called and said come down to Tacoma and see me. It was a very difficult weekend. Saying good-bye to her, knowing that it was my final good-bye was devastating. We hugged. I sobbed like a child. I was angry. I didn’t want my sister taken away from me. But she was ready to go and tired of fighting, and oh did she fight. She had this chemo dance that she did. The other cancer patients looked at her like she was crazy. She would get up, start to sing joyously “I’m going to get my chemo. I’m going to get my chemo.” whilst dancing around the room, a mass of boobs and hips swaying. My sister was amazing.

On that final weekend, I crawled into bed with her, snuggling up close. I told her a dirty joke. I think it’s the only dirty joke I’ve told in my life. Why I did it I will never know, but somehow it seemed right. She laughed and laughed and laughed. A weak laugh, but a laugh that brings a smile to my face as I type. 30 minutes later she laughed again. She apparently liked my joke.

I asked her whether she thought she had worked too much (she was a mortgage broker and had worked an enormous amount of hours during her heyday). I had read about people regretting their work hours on their death beds and I was just embarking on my own business at the time. So I asked. Her face lit up. Her eyes opened wide. She seemed to beam as she said to me “No. I made lots of money!” Then she laughed and said, “I got to travel, and buy my boat, and the houses. I had a great time!”. She badgered me again about becoming a mortgage broker myself. Ugh. Joyce. Let it be! Please.

I asked her if she had any advice for me and she quickly said this – “Don’t let fear stop you from doing something you really want to do.” You see I lacked the confidence of my sister. Here I was with all of this talent and zero confidence. I thought I wasn’t young enough. I wasn’t thin enough. I was a ‘wanna be’. The list went on and on freezing me in place. Keeping me in my comfort zone of complacency. My sister saw this and kindly gave me those 13 words that would change my life forever.

Have I suddenly turned into my sister.? Abandoning all fear? Hell no. I now deal with new fears – here they are:

I’ve written a play – “Don't Call me Aggie!” This is a play/play. The real deal. Actors. Lighting. No singing. A play. I had inspiration while on a walk, told my husband my idea, then went down to my office and wrote furiously for two days. One person hummed and hawed over the script. One person! And that was enough for me to delete the file on my computer! Fortunately my husband kept a printed copy and sent it out to a few people unbeknownst to me. It got picked up and we’re now doing a three-week run of it in September. Fear? Yes. What if people hate it? What if its boring? “Holy Moly” as Grandpa would say. Am I going to do it? Yes I am.

I’m working with Bill Sample on my Debut CD. Writing original songs with him for it. Who debuts an album at my age? What if the songs suck?  I have no money for it and a huge budget. Fear? Yes you could say that. Am I going to do it? Why, yes I am.

I’m currently writing my new show Divalicious! – again songwriting with Bill and writing the very personal script. Of course I have no money. What if people hate it? What if people think I’m self-indulgent? What if…What if? … Fear? Yes. Huge amounts of it. Am I going to do it? Yes I am.

I’ve come to realize Fear is just an emotion and that staying in your comfort zone sucks. If you receive anything from this post receive this – Keep moving forward. Swallow the fear and just try.  In the words of my much-loved sister Joyce …

"Don't let fear stop you from doing something you really want to do."